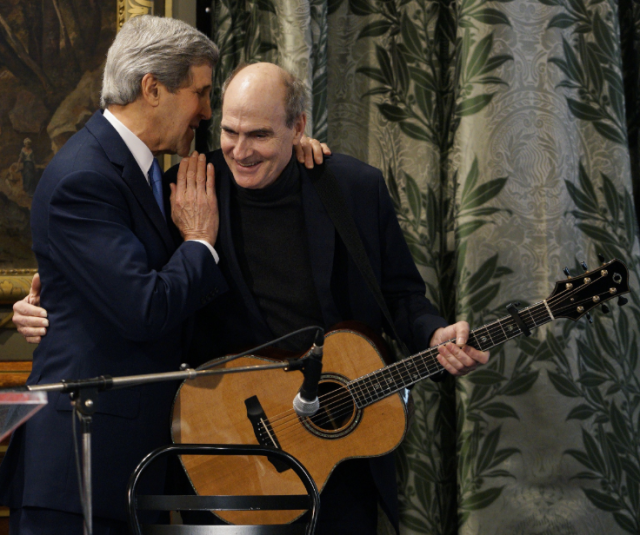 John Fonda Kerry has done us proud again. In an effort to apologize for Obama’s inept response to France’s call for solidarity, Kerry brought the White House minstrel to serenade the French with “We’ve Got a friend.” I am sure that struck a political chord with the sophisticated French.

Before arriving in Paris, Kerry said of the trip, “My visit to France is basically to share a big hug for Paris and express the affection of the American people for France and for our friends there who have been through a terrible time.”

The French gave us the Statue of Liberty as a gift of friendship…we give them a box of Luv’s, Huggie’s, Pamper’s (figuratively speaking) and a musical performance. Kerry’s uncomfortable swaying back and forth during the love fest led most to believe that Kerry had also brought with him a box of Depends.

Could it be that Kerry make the trip so that fellow Massachusetts friend and song writer James Taylor might benefit from a plethora of free publicity for his scheduled French tour in March? Was it a magnanimous diplomatic gesture that had nothing to do with helping the French in their time of need, but had all the earmarks of one elitist helping another? What did Kerry whisper into Taylor’s ear… “the American taxpayer’s who funded your promotional trip are stupid suckers?”

Perhaps a more appropriate song and message from Obama to the French people should have been Taylor’s “Steamroller.” “Well, I’m a steamroller, baby, I’m bound to roll all over you. Well, I’m a cement mixer for you, baby, a churning urn of burning funk. Well, I’m a demolition derby, yes, a heft hunk of steam junk. Now, I’m a napalm bomb baby, just guaranteed to blow your mind.”

Obama and his Secretary of State continue to embarrass the American people; two churning urns of burning political funk who now have their French allies saying, what a tacky, awkward ‘Faux pas’; neophyte napalm guaranteed to blow your mind!

I wonder if the French are now humming the words to the 1976 song of the year, sung by Judy Collins, “Send in the Clowns?”  The American people are.