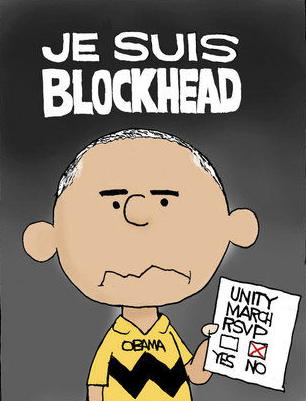 “The only force that can weaken us….is us.” mused Obama.

Mr. President, please be careful when using the term “us” to explain America’s weakness. You, Mr. President, are the singular weak force that has brought a whole new meaning to the role of Commander-in-chief, a position once viewed with respect, but now looked at as nothing more than a cover-up for a guileless amateur masquerading as a leader. Christians refuse to accept and participate in your evil antics because their righteous Commander-in-chief is Jesus Christ, not some immature, egotistical pot head who happened to get elected because the Grand Old Party (GOP) is led by a bunch of insular ‘good old boy’ politicians who could not figure out how to outsmart the opposition, energize their base, and win the last two elections against a “Bucky Barack Beaver” circus star with a bright white Ipana smile.

“Our politics are dysfunctional… societies don’t work if political factions take maximalist positions,” said Obama, who repeatedly claims to be a moderate stymied by the GOP’s supposed obstructionism and radicalism.

Maximalist positions? GOP obstructionism and radicalism?…only in our fondest dreams Mr. President. Conservative Americans go to bed every night hoping and praying that the GOP leadership will grow some “character” and become our radical heroes in the fight to save America from her downward spiral into your “Grave New World”…but as they say, only in our dreams.

“And the more diverse the country is, the less it can afford to take maximalist positions” …said you.

Je suis un lâche, “I am a coward,” a fitting description for a Commander-in-chief who does not hesitate to send our sons and daughters into dangerous battlefields, but is afraid to attend a well securitized rally in France with other world leaders. A president who cowardly hides behind atheists, gays, feminists, environmentalists, communists and Muslims to do his dirty work. A president who will never take a “maximalist” position because he is too used to assuming the “missionary” position.

Je suis un lâche, Barack, we have you pegged, but we knew that all along.
The only force that can weaken America is you, Mr. President.