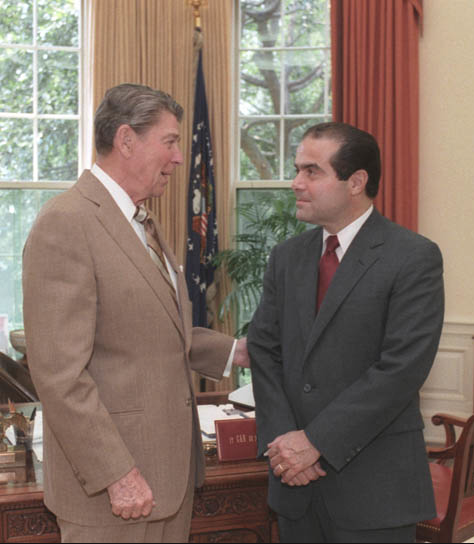 The late Justice Antonin Scalia, nominated by President Ronald Reagan in 1986, sat on the U.S. Supreme Court for almost thirty years. For those of us who do not discuss legal dissents or opinions over dinner, Scalia’s biggest legacy is his deep faith and devotion to his Catholic religion, a family man whose views were shaped around moral ethics, a man aware that a higher, Godly ‘Supreme Court’ would one day judge him.

Although his faith was a powerful driving factor in his life, Scalia, insisted that it was not the job or the place of a Catholic judge to reach ‘Catholic’ outcomes in cases, according to Richard Garnett, a professor of law at the University of Notre Dame. To Scalia, the responsibility for making sure our laws and policies are fair, just, and moral, lies with ‘we the people’ and the representatives we elect, and according to our system, judges should limit themselves to identifying and interpreting the laws that are given; they should not re-shape those laws, even to make them better.

Taking a quick break from his golf, fund raising holiday at Rancho Mirage, a far too casual, tieless, Obama spoke to the television audience on the passing of Scalia; his glazed eyes focused on the written message in front of him, his voice monotone and lifeless, a robotic response that lacked heartfelt, sincere emotion, a canned political speech that ended with a promise to fulfill his “constitutional responsibilities” and nominate a successor in due time, claiming that his responsibilities “are about our democracy.”

In a time when all our founding principles are under assault due to Obama’s Marxist leadership, perhaps someone needs to whisper into Barack’s over-sized ear that the Constitution Scalia so correctly protected and defended, calls for limited enumerated power, divided and checked across several branches and levels, and that the United States of America is not a democracy but a constitutional republic that was designed to protect American citizens from tyrannical leaders like himself!

Most disturbing about Scalia’s death is the media’s denial of wrongdoing! Why are reporters not performing their journalistic duty by asking questions and digging deeper into the suspicious circumstances surrounding Scalia’s death? Are talking points about Scalia’s successor more important than exposing a KGB-like run government that plots and uses the CIA and FBI like they are their very own concierge assassins who stand ready to murder authors, doctors, land owners, jurists and anyone else who gets in their way?

On Friday, February 12th, Justice Scalia went on a quail hunting trip with a group of about 35 to 40 people while staying at the Cibolo Creek Ranch, a luxury resort near Marfa,Texas, about 30 miles from civilization. He was staying at the invitation and expense of owner and Democrat campaign donor John Poindexter, a Houston manufacturing magnate who holds an annual free hunting excursion for “high profile” individuals, powerful elites whose names have not yet been divulged. It was the Justice’s first visit to the resort.

After a night of food and drink, Scalia retired to his room at 9pm, some reporting he did not feel well, some saying he was just tired and wanted to get up early the next morning to hunt. When Scalia did not appear first thing in the morning, the hunting party went on without him. At 11am, Poindexter, a recipient of a military award from Obama in 2009, found Scalia, cold and without a pulse, with a pillow over his head, his pajamas unwrinkled. Poindexter has since changed his story and describes the pillow as wedged between Scalia’s head and the headboard, a story recently reported in Obama’s favorite suck-up newspaper, the Los Angeles Times.

When the lifeless body was discovered, Poindexter coordinated to have Justice Scalia declared dead via a phone conversation with Justice of the Peace Precinct 2 Juanita Bishop, who was busy at the time and who then called Justice of the Peace Precinct 1 David Beebe to handle the vague call about a body at the ranch, no name mentioned. Both Justice’s of the Peace were out of town, so at 1:52 pm, Presidio County Sheriff Danny Dominguez showed up at the ranch. The Sheriff then called County Judge Cinderela Guevara who was shopping in the nearby town of Alpine. After she was informed that both Justices of the Peace were out of town, Cinderela pronounced Scalia dead, over the phone, and planned to drive to the ranch. Cinderela, however, was turned back when a U.S Marshal told her it wasn’t necessary for her to be there and they only needed to know if Scalia needed an autopsy.

Scalia’s doctor then called Cinderela around 8pm that night and told her 79 year old Scalia had some chronic ailments and a shoulder injury, so Cinderela felt comfortable not requesting an autopsy. At that point, Cinderela told the press that Scalia had died of a heart attack, a claim that hours later she changed when telling the press he died of natural causes. This is not the first time Ms. Cinderela has been the source of controversy. In 2013 Melaney Parker Rayburn was found dead after being hit by a train in Marfa, Texas. Cinderela who was a Justice of the Peace at the time did not order a rape kit or an autopsy, even though a Union Pacific representative told her that it appeared her body had been placed on the tracks while she was unconscious.

Then came another conflicting report when an eyewitness reporter from the San Antonio Express-news watched as a hearse with the logo “ Alpine Memorial Funeral Home” left the ranch at about 5pm, although the Washington Post later reported that a hearse arrived in the wee hours of the morning, about 2:30 am, at the Sunset Funeral Home in El Paso, a funeral home only a 31/2 hour drive from the ranch. If that was the case, what or who was in the first hearse?

To cover those crooked tracks, the Los Angeles Times (remember, Obama and Jarrett were in California at the time) reported that the first hearse was a decoy to distract the news media, (a single reporter) and “around midnight a van arrived to spirit the body away.”

William O. Ritchie, former head of criminal investigations for D.C. police, wrote that he was stunned that no autopsy was ordered for Justice Scalia. “How can the U.S. Marshal say, without a thorough post mortem, that he was not injected with an illegal substance that would simulate a heart attack,” asked Ritchie. “Did the U.S. Marshal check for petechial hemorrhage in his eyes or under his lips that would have suggested suffocation? Did the U.S. Marshal smell his breath for any unusual odor that might suggest poisoning? My gut tells me there is something fishy going on in Texas.”

Former U.S. Army Intelligence officer Ray Starmann said it best when illustrating the “fishiness” of Scalia’s death. Finding Scalia with a pillow over his head may have been a message of warning to anyone who gets in Obama’s way, a warning likened to the scene in the Godfather when “luca Brasi” sleeps with the fishes.”

Justice Scalia’s death throws into even greater uncertainty several controversial cases that were slated to be argued before the Court this term, among them a suit brought by a group of Catholic nuns, the Little Sisters Of The Poor, who are suing the Obama Administration over its religious exemption to the contraception mandate in the Affordable Care Act, arguing that providing insurance coverage for contraception infringes on their religious liberty. The stakes are large for an administration trying to fundamentally change America and used to strong-arming its way to favorable outcomes.

In his famous poem, ‘Death Be Not Proud’ my ancestor John Donne explains that Death is a slave to fate, chance, kings, and desperate men, but if the after life is eternal, then upon the moment a person dies, it is Death that dies and that person will never again be subject to Death.

May Justice Scalia rest in eternal peace with God… and every American patriot rest with a loaded gun by their side.