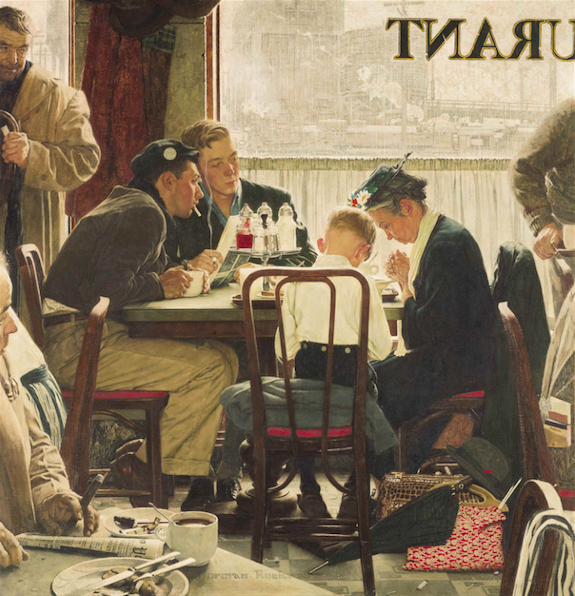 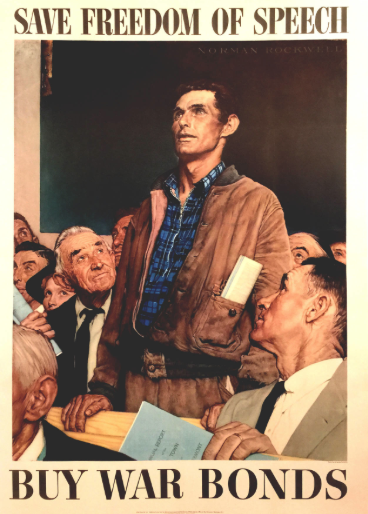 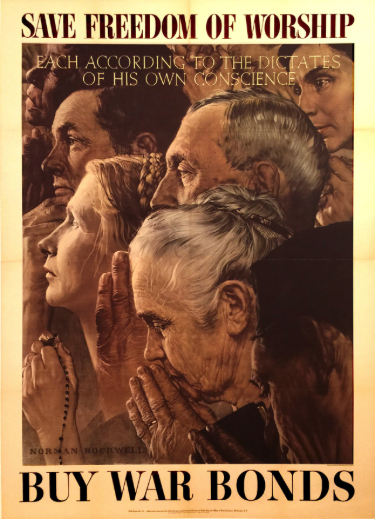 and Freedom from Fear;

The first two freedoms, speech and worship, were consistent with the First Amendment of the Constitution and were not controversial at the time, but the second two were rooted in an expansion of international foreign policy based on Roosevelt’s “New Deal,” where the federal government took far more responsibility for the economic welfare of the people than it had in any other administration, and eventually became the central tenant of modern American liberalism.

‘Freedom from Fear’ called for worldwide reduction of armaments so that no nation could threaten any other, and ‘Freedom from Want’ entailed a plan for world economic understandings that would secure for every nation a healthy life for its inhabitants. The media declared that the president had given the world “a new Magna Carta of democracy,” and the ‘Four Freedoms’ became the moral cornerstone of the United Nations.

After Roosevelt’s death at the end of World War II, his widow Eleanor often referred to the ‘Four Freedoms’ when helping draft and advocate for the passage of the United Nations Universal Declaration of Human Rights, that was adopted by the United Nations in 1948, a Declaration that believes “human rights” are created by governments, not by our Creator.

After Roosevelt’s ‘Four Freedoms’ speech, the Office of War Information (OWI) decided to have the four  freedoms depicted in posters, and wanted “fine arts men, real artists to render them.” They snubbed American painter and illustrator Norman Rockwell and instead asked Stuart Davis, Reginald Marsh, Marc Chagall and even Yasuo Kuniyoshi, a native of Japan and seemingly unlikely choice for American war posters, to come up with an appropriate design.

At the time, Norman Rockwell was a gifted artist who was able to capture the allure of American tradition and culture. His paintings told stories of families gathered around the dining room table, sledding down snowy slopes, skating on frozen ponds, or waiting for Santa’s arrival on Christmas day.

Rockwell knew he could depict, better than anyone else, America’s ‘Four Freedoms’ and spent the next seven months creating four paintings for the Saturday Evening Post, which were published in four consecutive issues of the Post, starting on February 20th, 1943. They were an instant hit.

The OWI quickly realizing it had made an embarrassing mistake by rejecting Rockwell, printed 2.5 million copies of Rockwell’s ‘Four Freedom’ posters, and made his four original paintings the centerpiece of a traveling war bond sales campaign which ended up raising more than $132 million dollars for the war effort.

According to art critic Deborah Solomon, author of “American Mirror, the Life and Art of Norman Rockwell,” the best painting in the series is probably ‘Freedom From Want,’ which takes you into the dining room of a comfortable American home on Thanksgiving Day. The guests are seated at a long table and no one is glancing at the massive roasted turkey or the gray-haired grandma solemnly carrying it. Solomon says to take special note of the man in the lower right corner, whose very face is pressed up against the picture plane. He has the air of a jovial uncle who perhaps is visiting from New York and doesn’t entirely buy into the rituals of Thanksgiving.

Instead of depicting a pre-meal moment of grace, with heads lowered in prayer, Rockwell painted a Thanksgiving table with no thanks, a stark interpretation of the casualness and dismissiveness that had begun to prevail toward time-honored American traditions. Had American’s begun to take their freedoms for granted?

“Sometimes we fail to hear or heed these voices of freedom because to us the privilege of our freedom is such an old, old story.” stated Roosevelt.

Thanks to Roosevelt, his version of ‘Freedom from Want’ is now seen as social justice and the resulting Marxist/NWO redistribution of wealth, and his “Freedom from Fear” has eclipsed into an American fear of a despotic government threatening to ignore America’s Second Amendment and the right to bear arms!

Almost seventy-five years later, Roosevelt’s “humanitarian” world vision, is being spearheaded by a United Nations bent on abolishing the sovereignty of the United States and it’s core freedom’s.

This Thanksgiving, may everyone open their hearts to the cherished ideals that made the United States of America, the ‘Land of the Free and the Home of the Brave,’ exceptional, and be reminded that it is only through the grace of God that every American can enjoy a life founded on his principles of freedom.

Happy Thanksgiving, and may God help keep that American flag flying, o’er the land of the free and the home of the brave!

Blessed is the nation whose God is the Lord, Psalm 33:12

5 comments on “Have a Norman Rockwell Thanksgiving, With Grace”