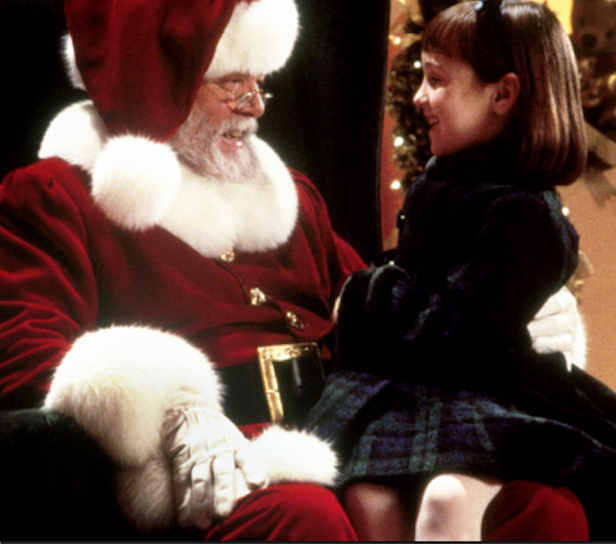 The main reason the Democrat Party lost the election was not because of their ill- chosen Barabbas-like candidate, or because the Soros organized lynch mob never showed up to vote, it was because God DID show up, a difficult concept for “blinded” nonbelievers to comprehend.

“We the people” had faith, believed, prayed, and won, with God’s help.

One of the best Christmas movies of all time is Miracle on 34th Street, a movie metaphor that establishes believing in Santa is like believing in God. Kris Kringle was on trial for everything he stood for and in the end, the audience learned that just like faith in God, miracles take place when you believe and in the end good always triumphs over evil!

The miracle in the 1994 version of the movie happened when a courageous young believer handed the judge in the Kringle case a Christmas card that contained a one dollar bill with “In God We Trust” circled in red. The judge then delightedly delivered his judgment;

“The young lady that just approached the bench presented me with this Christmas card, and this. It’s a one dollar bill. It’s gonna be returned to her shortly. But by presenting me with this bill she reminded me of the fact that it is issued by the Treasury of the United States of America. And it’s backed by the government — and the people of the United States of America. — Upon inspection of the article you will see the words: “In God We Trust.” Now, we’re not here to prove that God exists, but we are here to prove that a being just as invisible and yet just as present exists. The Federal Government puts it’s trust in God. It does so on faith and faith alone. It’s the will of the people that guides the government, and it is and was their collective faith in a greater being that gave and gives cause to the inscription on this bill. Now if the government of the United States can issue its currency bearing a declaration of trust in God without demanding physical evidence of the existence or the non-existence of a greater being, then the state of New York by a similar demonstration of the collective faith of its people can accept and acknowledge that Santa Claus does exists and he exists in the person of Kris Kringle. (Cheering!) Case dismissed.”

There is no law on the books that can dispute the unanimous tidal wave of support for everything Donald Trump stands for. As in the movie, the American people believed in an idea and placed their trust in the symbolic anti-government figurehead they believed would make America great once again!

Yes, a miracle did take place on 1600 Pennsylvania Avenue and because the Federal Government puts its trust in God, by faith alone, the government leaders must also accept and acknowledge that Donald Trump won the election by a demonstration of the collective faith of We The People.” Case dismissed!

Good triumphed over evil and the non-believing, villainous Democrat leaders are now doomed to a Grinch-like existence of doubt and tawdry turmoil. Perhaps if they were to pay more attention to the Federal government’s underlying belief of “In God We Trust” they would fare much better in the future and might even get something other than coal in their stockings!

May all have a Merry Christmas and continue to believe in fresh beginnings and a  new year rich with God’s blessings!