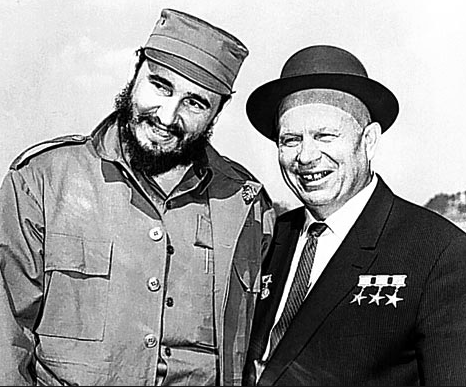 According to Ezra Taft Benson, the Secretary of Agriculture of the Eisenhower administration, Nikita Khrushchev said, “You Americans are so gullible. No, you won’t accept Communism outright, but we’ll keep feeding you small doses of Socialism util you will finally wake up and find that you already have Communism. We won’t have to fight you, we will so weaken your economy until you fall like overripe fruit into our hands.”

It is interesting to note that God also spoke of “overripe fruit.” In Hosea 10:1, God speaks of an empty vine in reference to the people who God had blessed far beyond what they could consume, a fattened populace taking money from large crops but who do not build a house for God and do not worship him. In Hosea 10:13, God goes on to say, “Ye have plowed wickedness, ye have reaped iniquity; ye have eaten the fruit of lies: because thou didst trust in thy way, in the multitude of thy mighty men.” Sadly, overripe Americans have consumed the fruit of lies by believing the truth of mighty Communists whose will is to destroy America.

As predicted by Khrushchev, America has slowly fallen under Communist rule and succumbed to the tenants of Leninist/Marxist social justice. In Karl Marx’s view, co-author of the Communist Manifesto, God, spirit and other abstractions must be removed and replaced with a more earthly, tangible, material world, a world created in its own image and not God’s. Lenin founded the Russian Marxist party between 1900 and 1903, called the Bolsheviki, who later renamed themselves “Communists” after Marx’s term in the Communist Manifest. The Leninist doctrine was “dialectical materialism” based on Russian revolutionary N.G. Chernyshevskii, whose novel, “What is to be Done?” became a classic of the Russian revolutionary movement. Russian Chernyshevsky rejected such concepts as honor, conscience, duty and self-sacrifice. He called for freedom in personal relations, dedication to society, women’s emancipation and socialism for revolution and believed that human behavior is motivated by self-interest. His “Dialectical materialism” is the theoretical foundation of Marxism.

The first feature of Dialectic thought is change, and then that change results in progress. But, progress to a Communist is uniquely different; it is a resolute forward advance followed by an abrupt turn and retreat. Having retreated a distance there is another turn and advance and it is through these series of forward-backward steps the Communist goal is approached. Lenin wrote the textbook, One Step Forward, Two Steps Back and Chinese Communist schoolchildren are taught to do the dialectical march taking three steps forward and two steps back. If we naively judge where the communists are going by the direction in which they are moving, we will be deceived.

The same Russian Dialectic theory applies to religion. The ultimate goal of Communism is the abolition of all religion. Lenin says, “Atheism is a natural and inseparable portion of Marxism,” however, in some states under Communist rule, religion is being patronized and encouraged because religion constitutes a force that moves to action a certain segment of the community, and Communism utilizes those existing forces! Religion, therefore, must be utilized to advance the final goal of Communism… which is world conquest!

As Khrushchev said to the French Socialists: “Some of our comrades are atheists in the Party and believers at home.” One Communist, then, may be instructed to join the Catholic Church. He is told to be baptized, to believe everything he has to believe, to be the very finest Catholic imaginable and to secure influence in Catholic organizations. He will then have opportunity to influence Catholic organizations in a program which may appear to be completely unrelated to communism but which may be important to their dialectical advance. Similarly, Communists are told to join various Protestant churches. Again they are to be fervently Protestant, orthodox to the core, ardent in spirit, and industrious in the program of that church. At the appropriate time, they too will be able to influence various church members and organizations for the Communist cause. Yes, many churches have failed us and radical churches have infiltrated America!

The final feature of the Communist dialectic is the role of conflict in the process of change. According to the dialectic, the driving force in any situation is the conflict of two opposing forces. Dividing people into hostile classes glorifies the struggle between them in the hope that the result will be good for the Communist party. Obama’s racist agenda and upcoming Jade Helm 15 exercises, an acronym for “Joint Assistant For Development and Execution” “Homeland Eradication of Local Militants”in 2015, just may be the rehearsal that eventually ushers in a “struggle” and in time the final Communist takeover of America. Remember Obama’s whisper into Russian President Medvedev’s ear…that he would be more flexible after his election? Bet Raul Castro is still chuckling under his breath.

Obama is a sleeper agent for world Communism and as Louis Farrahkan stated, Obama “was selected before he was elected.” The following telling video, is from an interview with Tom Fife, a physicist and U.S. government contractor who claims that in 1992 while visiting Moscow, a woman with undying allegiance to Soviet Communism (the Soviet Union had recently collapsed on December 31, 1991) told him that a black man named Barack, born of a white American woman and an African male, was being groomed by Communists to be, and would be elected, President of the United States.

You may start the video at the 5:00 minute mark to eliminate advertisements and Tom Fife’s interview ends at the 43:00 minute mark. The rest of the video describes a chance meeting with revolutionary Communist Bill Ayers who claims Michelle Obama asked him to write “Dreams of My Father” the autobiographical book Obama is said to have written.

In Matthew 16:1-3, Jesus scolded those who could not discern the times. Will we ignore the signs?

2 comments on “The Communist Takeover of the USA”