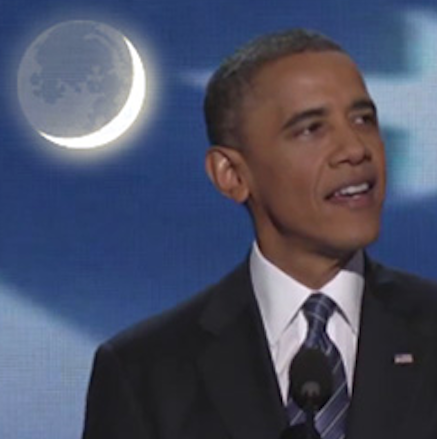 On Sunday, July 27th, Barack Hussein Obama and wife Michelle released a statement thanking Muslim Americans for their many “achievements and contributions”……”to building the very fabric of our nation and strengthening the core of our democracy.” The comments were made to mark the celebration of Eid-al-Fitr, a time of spiritual renewal for Muslims which comes at the end of the month-long fast of Ramadan. During EID, Muslims join in Islamic prayer, while saying “Allahu Akbar,”or “God is Great”

Muslims are “strengthening the core of our democracy?” A democracy is a form of government in which all eligible citizens are meant to participate equally, either directly or through elected representatives and where all people are judged as equals before the law. The collective will of the people then determines the rules of society. Under Islamic law, only Muslim males are entitled to full rights and non- Muslims have NO Rights! “Muslims helped build the very fabric of our nation?” Is that so? Go tell that to General George Washington who, with the help of God and Divine Intervention was able to defeat the British and declare America’s independence from them! Will any American Muslim openly praise  God for the way he blessed and founded this nation?

A common misconception by many is that God and Allah are one of the same. They are not…never have been and never will be. Let’s take a crash course on Islam. Every Jihadist, terrorist problem we face today can be traced back to the lack of faith in God’s word. God revealed to Abraham and Sarah (originally named Sarai) that he would give them children and descendants as numerous as the stars of the sky. After waiting many years, Sarah became impatient and convinced Abraham to sleep with her Egyptian handmaiden, Hagar, to produce an heir. The child born from that encounter was named Ishmael. Eventually, even though very old, Sarah finally did conceive a child, as promised by God, and delivered a son whom they called Isaac.

After many centuries of growth in their tribes, a descendent of Hagar, Muhammad, was born in Mecca in 570 A.D. In 610 A.D. Muhammed claimed he received revelations from the Angel Gabriel, the same Angel who announced to Mary the coming birth of Christ. Before that, Muhammed Ishmael’s descendants worshipped various “gods” numbering at least one for each day of the year. One of these was the moon god, the male counterpart to the female sun god. The moon god was called various names, one of which was Allah and it became the favorite god of Muhammed’s family. As Muhammed began to promote his new religion, he chose to declare Allah to be the one true god and claimed he heard words from Allah for the next twenty two years, many of which he recorded in the Quran. Along with the Quran are the books of Hadith which record what Muhammed said and did during his life.

Muslim scholars have noted that Muhammed’s writings can be divided into two distinct categories, those words written when he was in Mecca, which were largely about prayer and meditation, and those words written after he faced opposition in Mecca and fled in 622 at 52 years old. He had ten years left to live, mostly in Medina, before he would die in 632.

After leaving Mecca because of the lack of receptivity to his message, Muhammed traveled to Medina where he became became a warrior, invader and military leader. A band of tribal warriors accepted him as a prophet and pledged their loyalty to him. Muhammed led his followers in raids and battles, some against his own brethren the Quraysh. A seminal victory was won at Badr by Muhammed’s force of three hundred warriors against a thousand in the Quraysh caravan. He made much of this victory, even explaining how they would split up the bootie and behead them all. One leader (Uqba bin Abi Mu’ait) begged him for mercy and asked who would look after his children. Muhammed replied that hell would look after them and had him beheaded. Thus began a bloody and violent ten-year period in which Muhammed developed his principles of warfare to be waged against those who rejected his role as Allah’s prophet.

Muhammed stepped up his raiding operations and began to harass the Jewish tribes of the region who rejected him as a prophet of “God.” Soon Muhammed ordered his followers to “Kill any Jew that falls into your power.” Muhammed fell ill and died in 632. By the time of his death, most of the Arabian Peninsula had converted to Muhammad’s new religion Islam and used the Quran as its version of the Bible.

According to Dr. Mark A. Gabriel, PHD a former professor of Islamic history at Al-Azhar University in Cairo, Egypt, sixty percent of the Quranic verses talk about jihad and jihad became the basic power and driving force of Islam. Dr. Gabriel was an Iman of a mosque in Gaza, Egypt who changed his name and became a follower of Jesus Christ because of Muhammed’s most troubling command, known as the “Verse of the Sword” or the final development of Jihad in Islam, found in Surah 9:5: “Fight and Slay the pagans wherever you find them, and seize them beleaguer them, and lie in wait for them in every stratagem (of war)…”

To truly understand the current global jihadist threat , a knowledge of the branch of Islam known as Wahabism is essential. Wahabism was founded by Muhammad ibn “Abd al Wahab (1703-1792) who strongly advocated that Islam return to its roots of violence and a strict adherence to Muhammed’s teachings. It is considered the gold standard of Islam and explains why the 9/11 terrorists and Osama bin Laden came from the Wahabist nation of Saudi Arabia. What do Wahabists believe? According to Dr. Gabriel, there are two predominant Wahabist beliefs; one, the absolute destruction of the heathen world and two, that Muslims will inherit the earth and everything in it. “Those who reject Islam must be killed. If they turn back (from Islam), take (hold of) them and kill them wherever you find them…” (Surah 4:89) “So when you meet those who disbelieve, smite (their) necks till when you have killed and wounded many of them, then bind a bond firmly (on them as captives).” Surah 47:4

Dr Gabrielle writes, “The following verse is considered to be the final revelation from Allah regarding Christians and Jews; therefore, it is understood to override all other revelations.” It states, “ “And fight them until there is no more Fitnah (disbelief) and polytheism, i.e.worshipping others besides Allah and the religion (worship) will be for Allah Alone (in the whole of the world)…(Surah 8:39) In Dr. Gabriel’s own words, “Jihad is carried out in order to achieve the ultimate goal of Islam to establish Islamic authority over the whole world. Islam is not just a religion; it is a government, too.”

Lesser educated Muslims sometimes claim that the root of Isalm is “al-Salaam” which means peace in Arabic. That is false. An Arabic word only has one root and the root word for Islam is “al-Silm,” which means “submission” or “surrender.” The Quran not only calls Muslims to submit to Allah, it also commands them to subdue people of other religions until they are in a full state of submission to Islamic rule.

Will America submit…or have we already? Obama and his Oligarchy have embraced and appointed Muslims to positions of power in the highest echelons of the United States government and military. ISIS recently proclaimed that “We will raise the Flag of Allah in the White House.” Are Muslims already… “in”…. the White House ready to fulfill their Islamic duty?

In November of 2010 while at the University of Indonesia, Obama said, “ I made clear that America is not, and never will be, at war with Islam.”

This is the one time I believe Barack Hussein Obama, a moment of truth, reflected in the light of the Islamic crescent moon.

Deuteronomy 4:19  “And when you look up to the sky and see the sun, the moon and the stars-all the heavenly array-do not be enticed into bowing down to them and worshipping things the Lord your God has apportioned to all the nations under heaven.”

8 comments on “Obama Did Tell the Truth, Once”