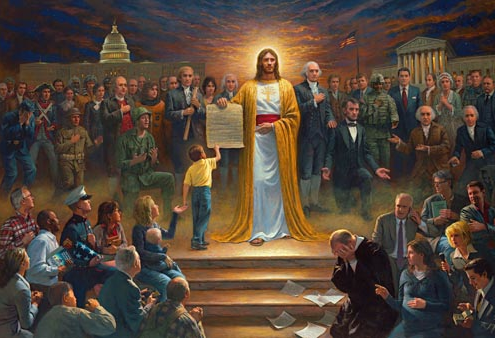 The “Cause” for  independence struck a deep chord in many a colonists heart;
it was time to break away from the imperialist British king, begin a fresh start!

General Washington knew how to tap the well of patriotism, he was a born leader;
Washington commanded the American Revolution, freedom his righteous pleader!

Political indifference in America was a treasonable behavior, a contemptible act;
liberty loving people were willing to risk their lives for the Spirit of “76 pact!

The Continental Army was comprised of untrained recruits ready to fight and die;
Minutemen ready at a moments notice to augment the militia and multiply!

Washington believed in the sacredness of “The Cause,” with God by his side;
the war would be won with the help of Divine Providence, his heavenly guide!

Great Britain’s strategy was “top down” including a well trained militia;
an immense Navy ready to invade with their available floating flotilla!

Americas uncommon approach was from the “bottom up” based on popular consent;
“We the People” and fledgling Republic were determined to win and not to relent!

The American “bottom up” strategy with its grassroots efforts worked well;
organizational skills, tenacity and the will to win, all qualities difficult to dispel!

Neither illness, lack of weapons nor shoddy conditions could quell the patriotic tide;
citizens willing to sacrifice their fortunes, their sacred honor and even their own hide!

General Washington prepared to face death rather than suffer dishonorable defeat;
he was the epitome of an officer and a gentleman who would never settle for retreat!

After a near-miss escape across the East river, Washington’s army was dazed;
the militia was sick, emaciated and demoralized, but their faith went unscathed!

The war entered a new phase with renewed courage and determined discipline;
the Continental Congress committed its support to help Washington’s militiamen!

A final version of the Declaration of Independence was ready to sign on July fourth;
the Continental Congress and Army were one, hereinafter and henceforth!

Loyalty to the the “Cause” trumped truth, the press cast an optimistic spin;
few Americans were aware their young brave soldiers were taking it on the chin!

American independence was felt to be foreordained, the underlying cause due;
resolute troops forged ahead with certainty, as their trust in God’s grace grew!

The “Cause” persisted for eight long years, eventually leading to a victorious win;
America’s independence won with courage and determination, by our patriotic kin!

On July 4,1776, the Declaration of Independence was signed, a Republic was born;
a government based on the consent of the governed, citizens leading the reform!

Power flowed from the people to its government, leaders were led by popular vote;
politicians legislated honestly and responsibly, careful not to self- promote!

There was a patriotic obligation for citizens to be educated and informed at all times;
to keep a watchful eye, make sure public servants did not commit treasonous crimes!

America is once again faced with fighting for the same freedoms it long ago won;
rogue politicians are ignoring the Constitution, a tyrannical government has begun!

This is an historic moment in time, one that will forever impact future generations;
Americans must break the government control and seek true emancipation!

“If freedom of speech is taken away, then dumb and silent we may be led,
like sheep to the slaughter,” said Washington, his wise advise full of dread!

The time is right to heed Washington’s wise warning and rekindle the “Cause”
put an end to coercive “top down” government tactics, there is no time to pause!

Citizens have a responsibility to uphold Americas Constitution and laws therein;
to lose freedoms ordained by God would be the nations downfall and a tragic sin!

Millions of soldiers have answered the brave call to defend Americas turf;
courageous troops willing to die because they know what freedom is worth!

It is time for citizens to fight for freedom as well, for the sake of future generations;
it is time to stop listening to the Marxist Obama regime and his fascist corporations!

It is time for every concerned American to get out and vote for real change;
elect those who support the “Cause,” shake up Capitol Hill and rearrange!

It is time to stop listening to politicians and their lawless intimidating allegations;
it is time to confront their deceitful lies, to prosecute and ask for their terminations!

It is time to remember America was founded on Judeo-Christian Commandments;
founded by God and not by some hedonistic paganistic fairytale enchantments!

It is time to heed the daily dire warnings and join the fight for liberty and justice for all;
follow our forefathers lead, understand it is our duty to heed the patriotic call!

It is time to pray for the brave soldiers and leaders who are fighting for Americas soul;
bless them as they fulfill their destiny for humanity, their divine and heavenly role!

The Amazing Grace of the July Fourth Cause….

“Let us then with confidence draw near to the throne of grace, that we may receive mercy and find grace to help in time of need. Hebrews 4:16

4 comments on “The Amazing Grace of the July Fourth Cause”