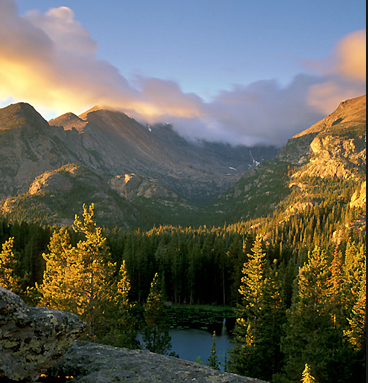 Colorado is one of the most beautiful states in America. It boasts breathtaking mountains, bubbling brooks, bountiful blue skies, and broad views. It is a magnificent landscape that bursts with such an unlimited palette of colors and intricate animated patterns, only God could have imagined and created it.

While backpacking along one of Colorado’s many winding mountain trails, the steep climb is sure to guarantee cool bursts of air; cold shots of nature’s liquor that manage to jolt dulled, polluted senses back to life with an intense intoxication that fulfills rather than fails. With every step forward, the neglected soul awakens, vulnerable, eager to seek the contentment, joy and inner gladness that only God’s natural kingdom can so wondrously provide. As the senses sharpen, the eyes of the hiker rhythmically blink with the sparks of sunlight that appear like flickering candlelight against the lush deep branches of the forest. The hiker’s revitalized eyes take notice of the squirrel jumping from one tree to the next, the brilliant blue Stellar jay that just darted overhead, and the clump of tiny yellow wild flowers peeking through the lime green moss.

When finally reaching the top of the mountain, a spectacular view opens up. It is like an expansive blue snow globe filled with eagles soaring high, huge puffy pink clouds and faraway horizons. To fully appreciate the breathtaking sight, a contemplative rest on a sun warmed boulder provides a ready and unobstructed front row seat. There the spent spirit can replenish and help mend the ravages of a life dictated to by a sterile electronic world. It is there where one can take in big gulps of fresh country air and allow the relaxed mind to imagine, dream, and ponder life’s decisions. It is also there where the hiker will watch the sun magically tuck behind the distant mountain for it’s night’s rest, a radiant disc of bright yellow light that will lead the orange, pink and purple stripes into inky darkness.

The stark black sky has now snuffed out the light of day and the air begins to feel damp and gloomy. Loneliness fills the hiker’s thoughts and his blinded eyes yearn for light. Like a well rehearsed play, the hiker bows his head to pray and is no longer alone, but is surrounded and soothed by God’s omnipresence. The hiker turns his gaze upward, just in time to witness a bright sparkling star auspiciously pop out of the blackened sky. Seconds later, millions of stars crowd the celestial ceiling, their demonstrative brilliance speaking volumes about the magnitude of life and its infinite possibilities. Overwhelmed with the heavenly display, the hiker whispers aloud a prayer of thanks, “Thank you father for always being there when I need you most.” “Please save me a place in heaven where the light of your love is eternally lit.” With that, the hiker pulled his sleeping bag out of his pack and peacefully slept under the immense starlit sky.

Meanwhile, on a mountain trail on the other side of the river, another hiker is making the long steep climb to the top. It will take quite a long time to get there, so a relaxing joint is lit. The fresh mountain air quickly becomes an afterthought as long deep inhales of marijuana fill and calm his mind, body and spirit. The inner turmoil that had been plaguing the hiker earlier this week is now conveniently buried deep within the psyche, ignored and artificially placated by weed. Mother nature, always on the ready to rescue and replenish the soul with it’s powerful restorative powers, is now just a pleasant backdrop. As the smelly joint burns down, the hiker’s thoughts focus on how much better that variety of weed was compared to last week’s purchase and how it has become such an important part of his daily routine now that it is legal and so readily available.The bright sunlight flickering through the tree branches makes the hiker’s glazed over eyes sting, so dark sunglasses are put on to shut out the light. The summit is finally reached. The energy sapped hiker collapses on the nearest boulder for a much needed nap. Upon awakening, it is pitch black and the cold air has chilled the once fuzzy warm body and spirit. The drug induced high has worn off, so the hiker attempts to organize his scrambled thoughts that are now filled with anxiety and loneliness. Another joint is lit and the sleeping bag is pulled out of the backpack. The hiker pulls the cocoon-like sleeping bag over his entire body and head and quickly zips out the dreary night…as the first of millions of twinkling stars appear overhead.

Colorado is now infamously better known for its marijuana superstores than for its majestic mountains. While the state coffers fill up with cash, the state’s coffin’s are filling up with the youthful dead. Young children are being exposed to marijuana edibles such as lollipops, candies, gum, snacks and drinks, all laced with pot. In fact, two FOURTH GRADERS  were just busted for selling edible marijuana at their school. It is a Rocky Mountain high all right….but one that can no longer be associated with fresh air and clean living.

There are many scientific REPORTS that warn about the recreational use of marijuana and its adverse side effects on the youthful brain. Scientists now know that the average strength of today’s marijuana is some 5 to 6 times more potent than it was in the 1960’s and 1970’s and some strains are upwards of 10-20 times stronger than in the past. There are more than 400,000 emergency visits every year now due to things like acute psychotic episodes and panic attacks. In addition, persistent use of the drug can blunt academic motivation and significantly reduce the IQ by up to eight points. Even casual use can result in observable differences in brain structure, specifically those parts that regulate emotional processing, motivation and reward. Even more important is the impairment to the human soul and the drugs ability to set up roadblocks to God.

God gives every human being a divine purpose in life and a unique cross to bear along the way that aids in spiritual growth. Life’s trials and tribulations are his way of setting up a journey with signposts along the way that help guide, warn, and re-direct. As we all know, there is a constant struggle between the human conscience and the holy spirit. When adding substance abuse to that struggle, reasoning becomes cloudy and tilts the conscience toward the selfishness of human greed and it’s appetite for instant gratification. Too many wrong decisions in life lead to destructive detours where the devil is the toll taker. As the devil cunningly collects his tolls, he is wickedly preparing his dead end highway to hell.

“But if anyone causes one of these little ones (children) who believe in me to sin, it would be better for him to have large millstone hung around his neck and to be drowned in the depths of the sea.” (Matthew 18:6)